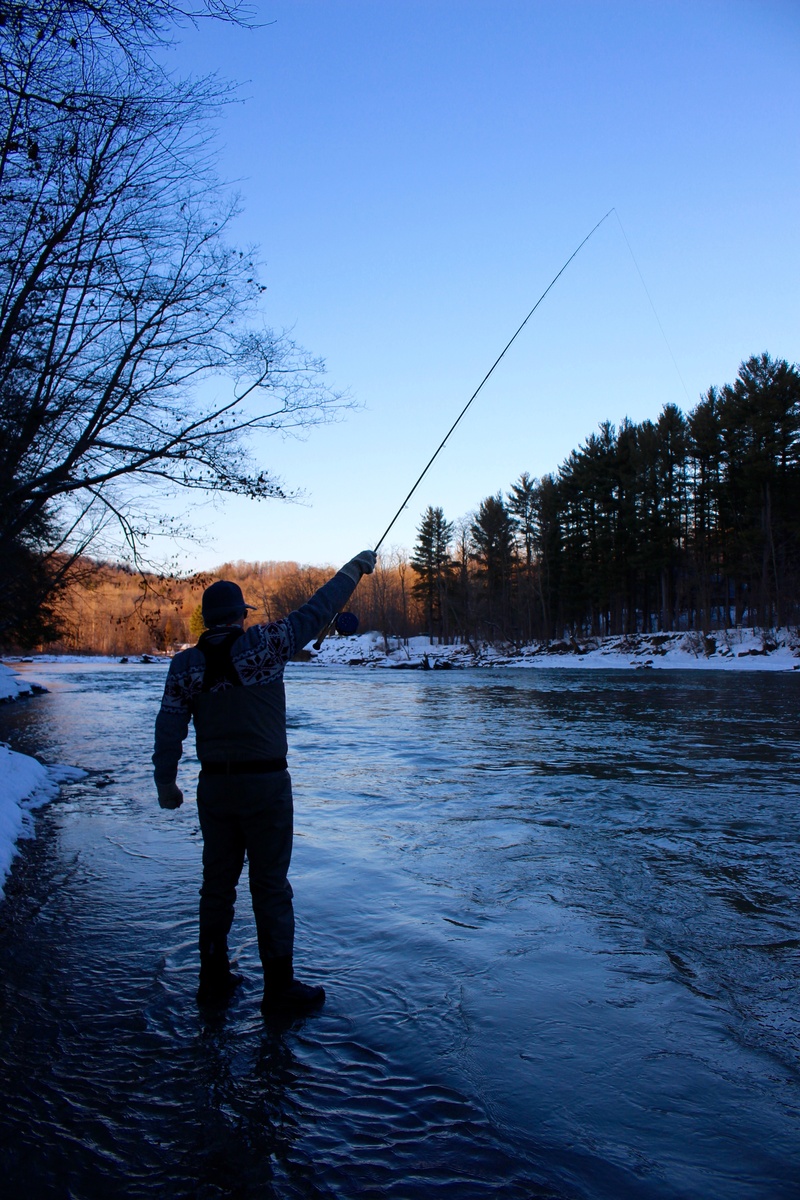 In the winter, keeping a high rod tip while swinging can really slow down the swing and keep it deep- right where it needs to be fished

Wow, pretty hard to believe it is already 2017. As we go forward in the new year, I thought I'd take some time to reflect on what 2016 had to offer. On the whole, fishing was steady- not the greatest run I've ever seen, but far from the worst. During the spring run, the Chagrin fished much better than the Grand though we did have some lights out days on the larger water. This was partially due to the high water the Grand saw nearly all spring long, and by the time the levels dropped consistently, the water was warming up fast. Another good thing we saw last spring was a strong presence of 3 to 6 pound fish, though we found quite a few much larger. This good showing of one and two winter fish in the mix last spring should mean that the 2017 spring run should have a high number of three winter fish, the 8 to 12 pound plus fish.

During the fall run, we saw the reverse. Very low water for nearly the entire month of October. This kept most fish from entering until around the last week of the month. Interestingly enough we did see quite a few salmon in the Erie creeks in October, including Pinks, Cohos, and Kings. Then when we started getting water consistently, the Catt stayed offline for most of the fall season. This resulted in our focus on the smaller area creeks for the majority of the fall season, with only a few days spent on the Catt during good conditions. Like the spring, the fall run numbers were not the highest we've ever seen, but the fishing remained consistent and generally resulted in a handful of fish landed per day per angler.

Probably the brightest note of the fall season was the high prevalence of good sized lake run browns in the Erie creeks. This is something that I've been noticing more and more over the last three seasons. While steelhead numbers may be a bit lower than normal, we are more than making up for it with trophy browns. Our biggest Erie brown this season was ten pounds, but we lost a few much larger fish, and it seems like the fish averaged somewhere near eight. We're pretty stoked about this fishery as it continues to develop, and would like to see where it goes. The strain New York stocks is domestic browns. There are other strains available that grow much larger and migrate further up river than lazy domestics (wouldn't it be nice to see some 30 pound seeforellen browns?!), but only time will tell.

Anyways, spent the first few days of the New Year hitting the Catt. The water was up, but the visibility was just good enough to get me out of the house. Didn't find any out there in the cold, but boy what a beautiful time to spend on the water. Enjoy it while you can. April will be here before you know it.

Reply kyrie 5
10:52 PM on January 6, 2022
I must show appreciation to this writer just for rescuing me from this particular instance. As a result of browsing through the world-wide-web and obtaining methods which were not powerful, I was thinking my life was over. Existing devoid of the strategies to the problems you've resolved as a result of your write-up is a serious case, as well as ones that could have negatively damaged my entire career if I had not noticed your web page. Your personal ability and kindness in maneuvering the whole thing was very useful. I am not sure what I would've done if I hadn't discovered such a solution like this. It's possible to now look forward to my future. Thank you very much for your expert and sensible help. I will not think twice to recommend your blog to any person who would need guide on this matter.
kyrie 5 http://www.kyrie5.org
123...14Next »