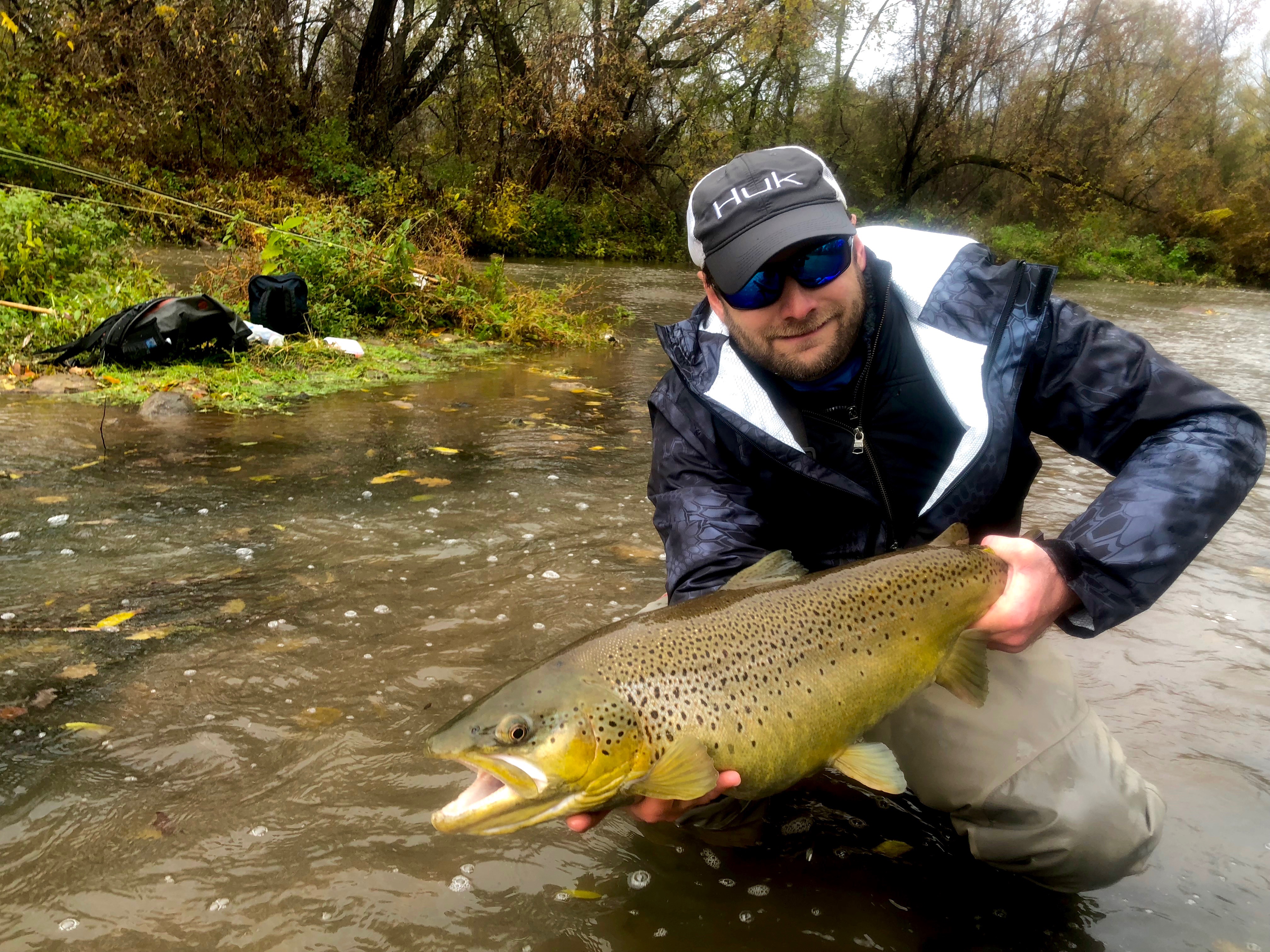 Our big trout of the season!
Well it's getting to be that time of year again. Though there are still decent numbers of steelhead around, particularly in the Grand River, and that we still have decent temperatures due to the cool rainy beginning of May that we've had, steelhead season is coming to an end. So it's time to look back at what the '18-'19 season had to offer.
Starting with last fall, the end of September was very hot, something that we are starting to see frequently. When I first started fly fishing for steelhead twenty some years ago, we used to really see decent numbers of fish in our New York rivers by mid-September, sometimes even earlier. My earliest steelhead I can remember catching was August 27. This was due to the fact that twenty years ago, mid-September was what early October is now weather-wise. Going forward, it looks like the season shift that has been noticably occurring over the past decade or so with warmer early fall temperatures will become the new normal, and that's a shame because early fall before the main run gets in is my favorite time.
Then by the first or second day of October the rains came. And it didn't stop for two months. There was a stretch of 45 days or so right in the middle of peak fall season where it rained 39 days. Despite the flows the overall numbers of steelhead throughout the New York Erie creeks was lower than normal, with most fish running between 20 and 24 inches. It was as though a year class was missing. In recent years, New York has struggled with smolt size due to cold flows at the hatchery. This combined with the very high populations of walleye and cormorants likely has had an effect on adult steelhead numbers.
Whereas Lake Erie creeks and rivers were inconsistent, the Lake Ontario brown trout run was unreal. Beginning in earnest the first week of November and continuining all through the winter into the spring, the lake run brown fishing was the best I've seen it in years. Average days were double digit hookups, with many, many brown trout between 28 and 32" taken. Swinging streamers for the browns was just too much fun. This year our biggest trout of the entire season was a 32" lake run brown with about a 20" girth. The big hen went 15 maybe 16 pounds!
As for spring in Ohio, we had very good and consistent fishing. I'd say the run was right about average numbers and size wise. It was good fishing with the average day spey fishing being 2 or 3 hookups per rod. We did have some banner days, particularly in mid-April when spey fishing hookups approached or exceeded double digits, though the Grand started to get less consistent flows due to significant amounts of rain the last two weeks of April which is the timeframe we usually see the best spey fishing.
As is normal for the first week of May, the smallmouth have started making a strong showing. Those guys should stick around for the next month or so, providing good fishing. If this cool wet weather keeps up, there may even be a steelhead or two still in the Grand or the Catt in June, but it wont take them long to drop out to the lake if there is a prolonged heat spell.
If there was one factor that determined success all season long, I'd say it would have to be adaptability. Being able to recognize and react to changing and inconsistent conditions was key to consistently finding success, whether it be finding new spots that were holding fish, fishing different rivers more frequently, or even targeting different species such as lake run browns. We found success by keeping an open mind and not falling into the rhythm of complacency. I guess in steelhead fishing, that's about as good as you can strive for- the ability to meet the challenges that present themselves and hopefully find a fish or two along the way.
We're already excited for next fall. 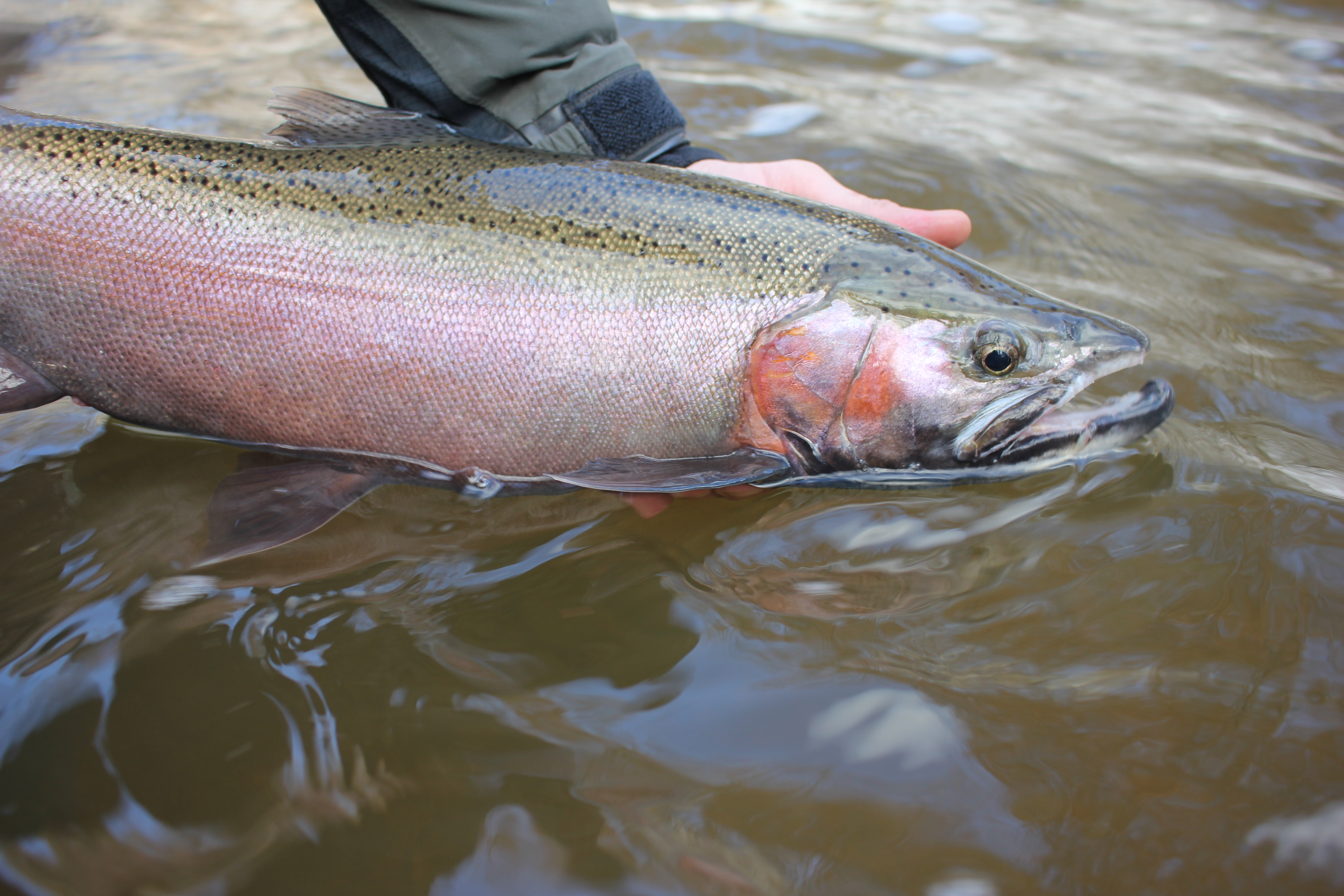 Reply jordan 12
8:04 PM on January 26, 2022
I simply wished to appreciate you all over again. I do not know what I could possibly have taken care of without those aspects revealed by you regarding this area of interest. It was an absolute traumatic case in my view, however , finding out the specialised avenue you treated it took me to leap with happiness. I am happy for the support as well as sincerely hope you recognize what a powerful job that you are undertaking teaching people through the use of your webblog. I know that you've never come across any of us.
jordan 12 http://www.jordan12.us.com

Reply golden goose
8:07 PM on January 26, 2022
I want to show my appreciation to this writer just for bailing me out of such a problem. Just after exploring through the world wide web and obtaining ways that were not helpful, I was thinking my entire life was well over. Being alive without the presence of strategies to the difficulties you have fixed by way of your posting is a crucial case, as well as the kind that would have badly affected my entire career if I hadn't discovered your web blog. Your primary ability and kindness in playing with the whole lot was important. I am not sure what I would have done if I hadn't come upon such a step like this. It's possible to at this moment look forward to my future. Thanks a lot very much for the specialized and amazing guide. I won't hesitate to propose your web site to anyone who would need counselling about this subject.
golden goose http://www.golden-gooses.com

Reply off white
8:48 PM on January 26, 2022
I just wanted to post a brief message to be able to appreciate you for all of the magnificent tips you are giving at this website. My extensive internet search has at the end of the day been recognized with reliable strategies to write about with my companions. I would state that that most of us readers are quite lucky to live in a perfect community with so many special individuals with insightful tricks. I feel really privileged to have used your site and look forward to really more brilliant minutes reading here. Thanks again for a lot of things.
off white http://www.offwhiteoutlet.us.org

Reply supreme clothing
8:50 PM on January 26, 2022
I have to express thanks to the writer just for bailing me out of this type of situation. As a result of looking through the internet and finding ways that were not beneficial, I assumed my entire life was gone. Living minus the answers to the issues you have resolved all through your main article content is a crucial case, as well as ones that could have in a negative way damaged my entire career if I hadn't discovered the blog. Your main mastery and kindness in handling all the stuff was priceless. I don't know what I would've done if I had not encountered such a solution like this. I'm able to at this moment look forward to my future. Thanks for your time very much for your impressive and result oriented guide. I won't hesitate to propose the blog to any person who should have counselling about this issue.
supreme clothing http://www.supremes-clothing.com
123...17Next »