Kicking off the season 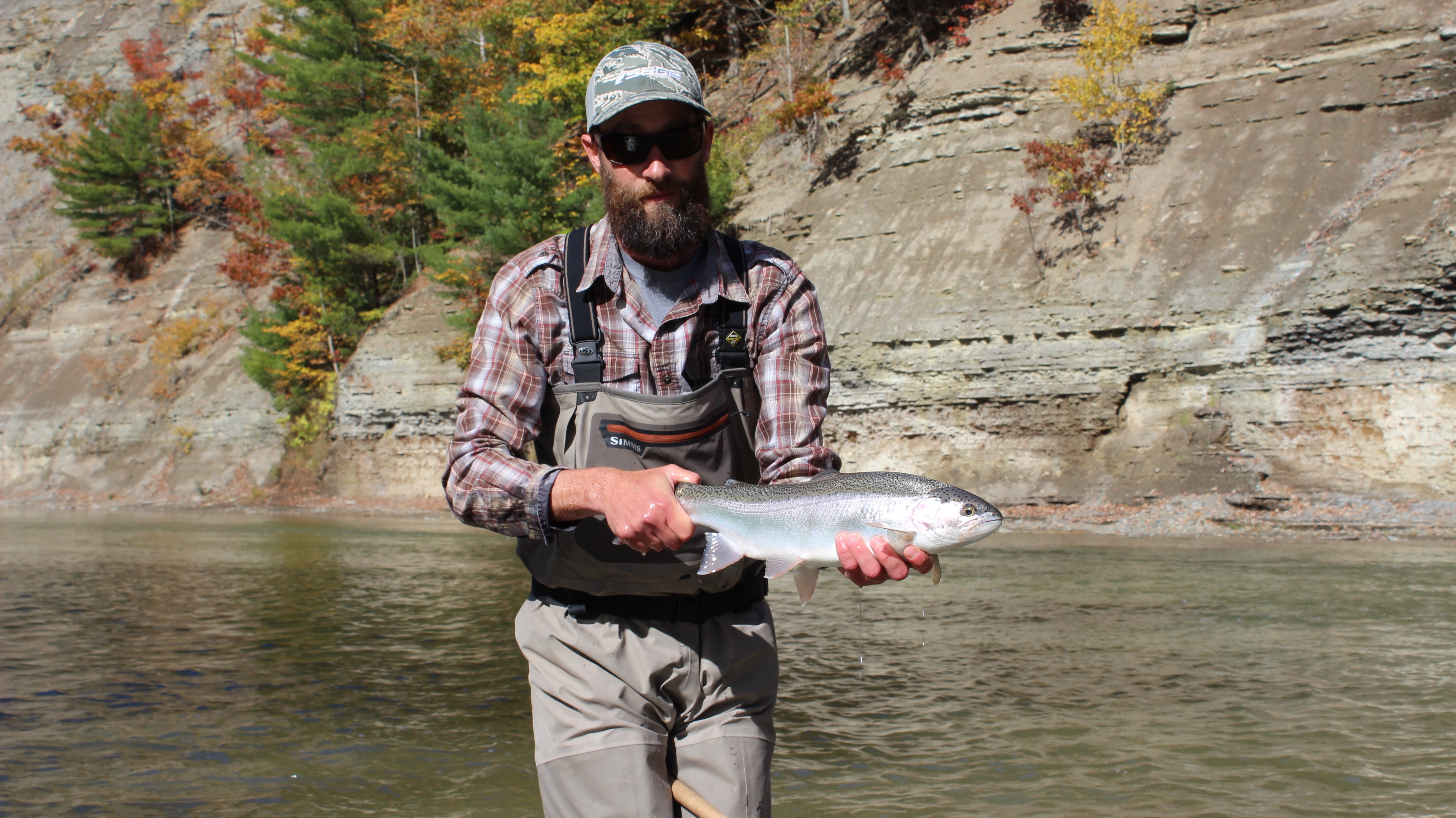 Jeff with a beauty
The last week was the start of the guiding season for us in New York. Early in the week, the water everywehre was very low with low numbers of fish in the smaller creeks and better numbers in the Catt. Due to how low the flow was, we resorted to swinging smaller flies on scandi heads with floating and light sinking polyleaders and tapered tippets down to 3x. It's a beautiful way to fish steelhead, but the light tippets mean lost fish. Before the mid-week rain hit most days yielded between two and four good grabs with about half resulting in hookups, though the fish we hooked broke us off due to the light line. Regardless, it was really nice to be able to fish the floating line for a while, and we even had a really great take on a riffle hitched muddler and landed a good sized resident smallmouth!
Mid last week, we got some very much needed rain in the area. The creeks spiked up and stayed high for enough time to spur on fish movement and really kick off the fall run. As the smaller creeks were dropping and clearing towards the end of last week, we were seeing decent numbers of fresh fish moving through. Not the big push of fall run fish by any means, but a nice little run with enough numbers that each decent pool held at least a couple fish and sometimes more. Covering all the water well resulted in multiple hookups from both indicator and swing techniques.
Then the Catt dropped back into shape and we were able to get one really nice day out in the mid river. With the water still being good temperature wise, swinging a scandi and a light or medium sinking polyleader was the key. Due to where fish were holding, primarily in the drop-off behind riffles, having the ability to mend well over multiple current seams was key. This is difficult to do well with a skagit due to how heavy the head is. The fish we landed were chrome fish that looked like they hadn't been in the river long. I expect that many of the fish that were holding from Gowanda down due to the low water have now pushed up into the middle river and will continue working up as the conditions allow.
Looking ahead, we have rain in the forecast today. They're calling for half an inch or more. This will likely dirty the Catt up for a few days, and might stain up the smaller creeks for a day as well. But it will mean that fresh fish should push in again, and that fish that entered last week will have the chance to push up higher into the creeks. All in all, pretty excited for how things are shaping up.
Tight Lines 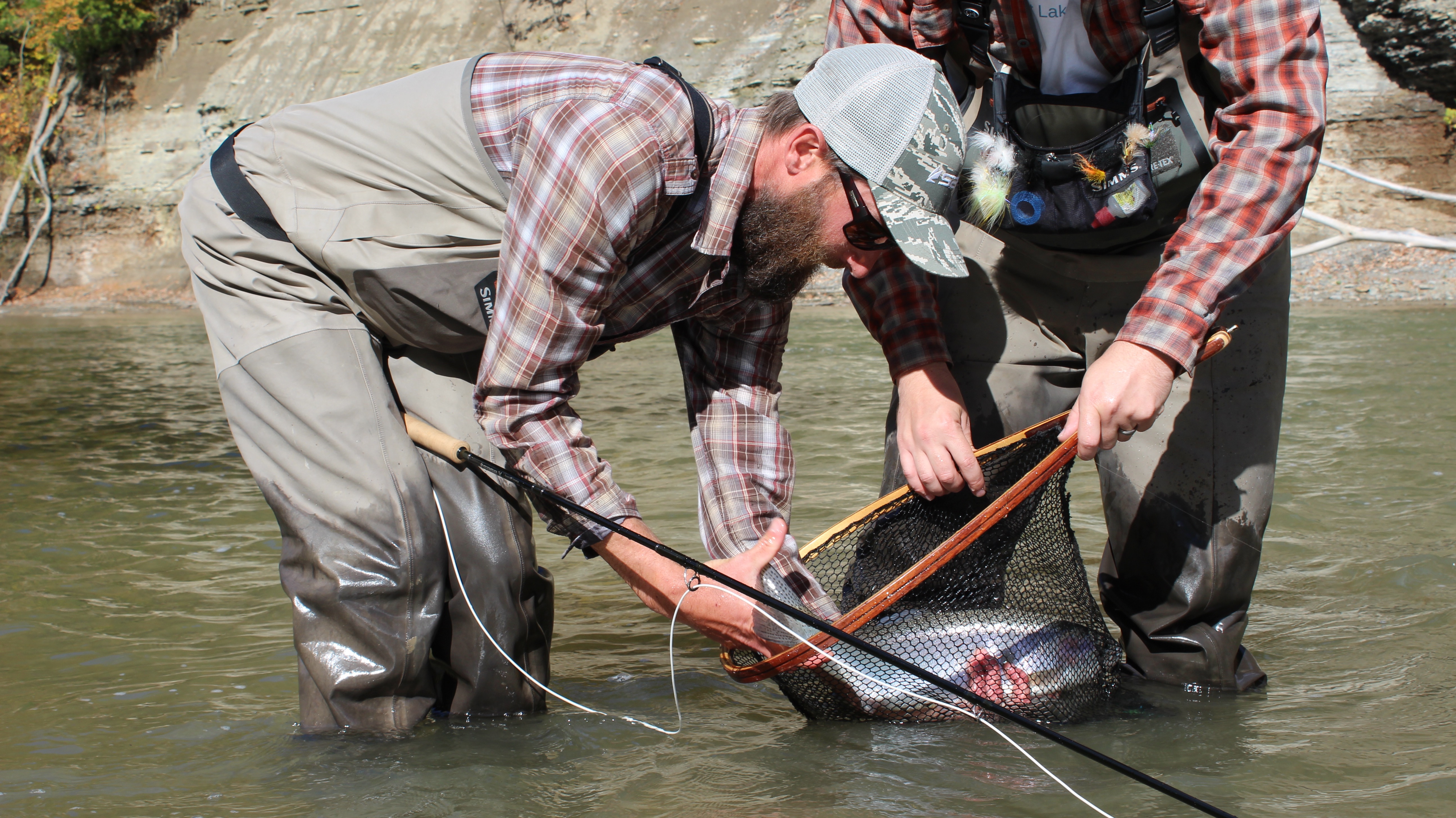 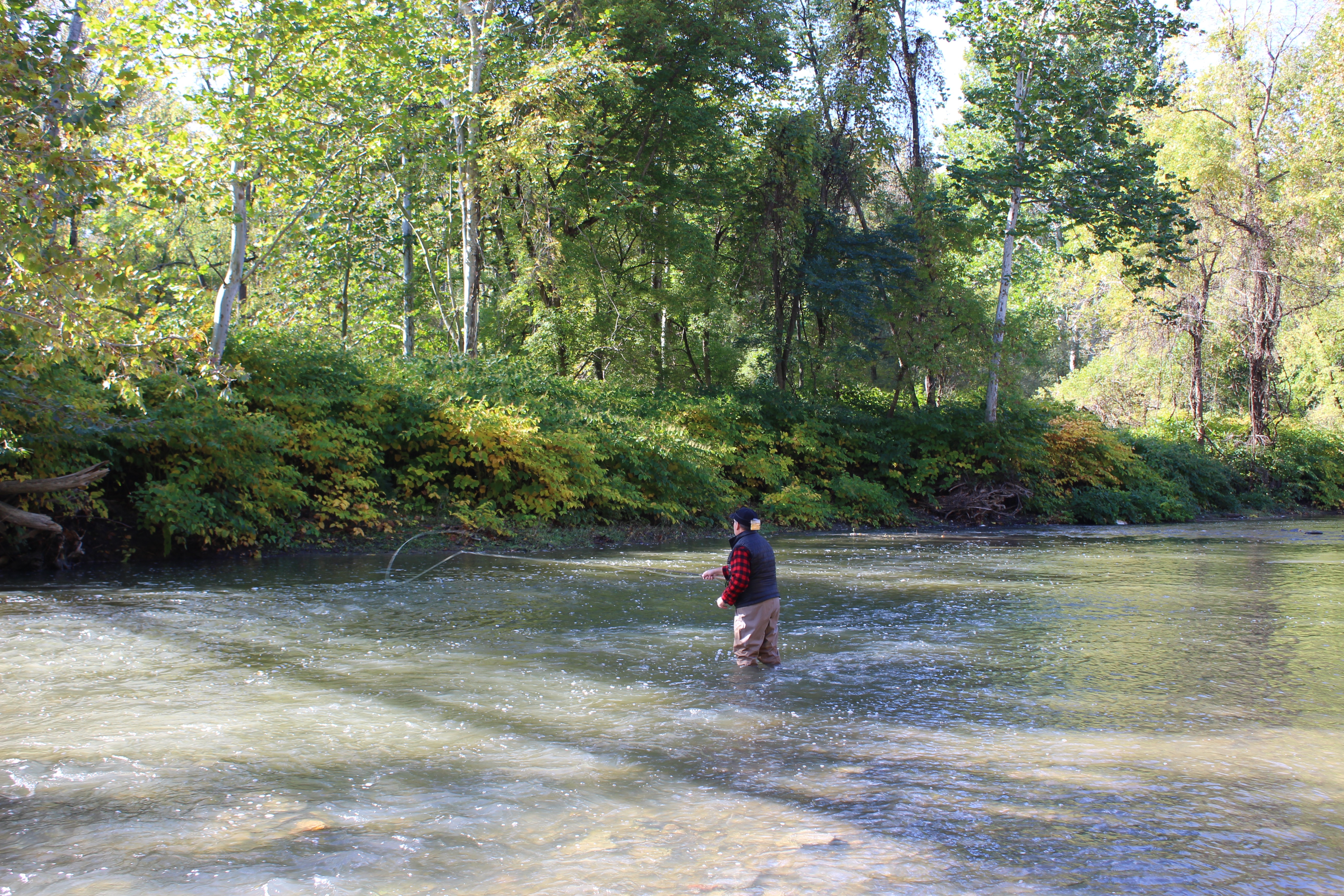 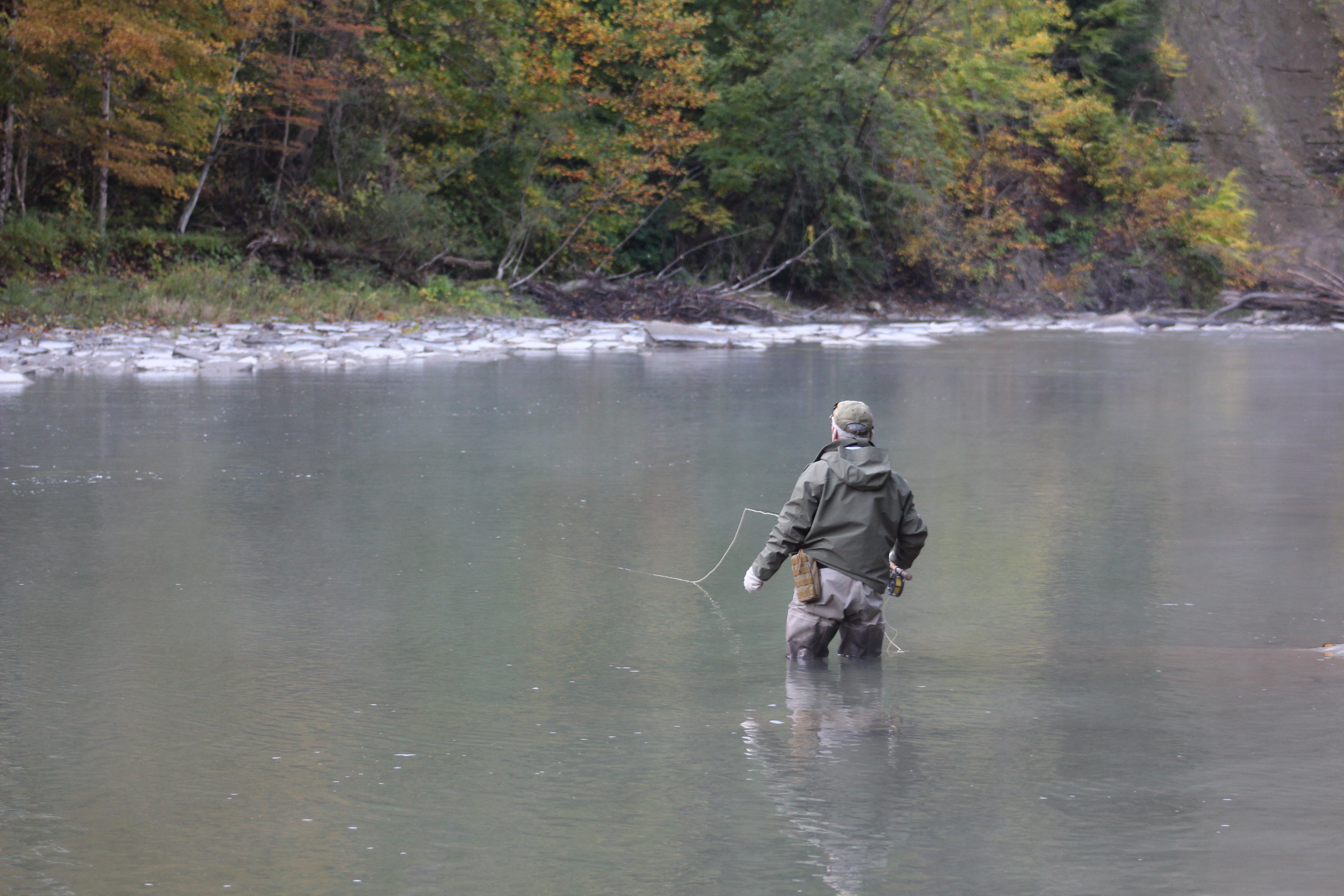 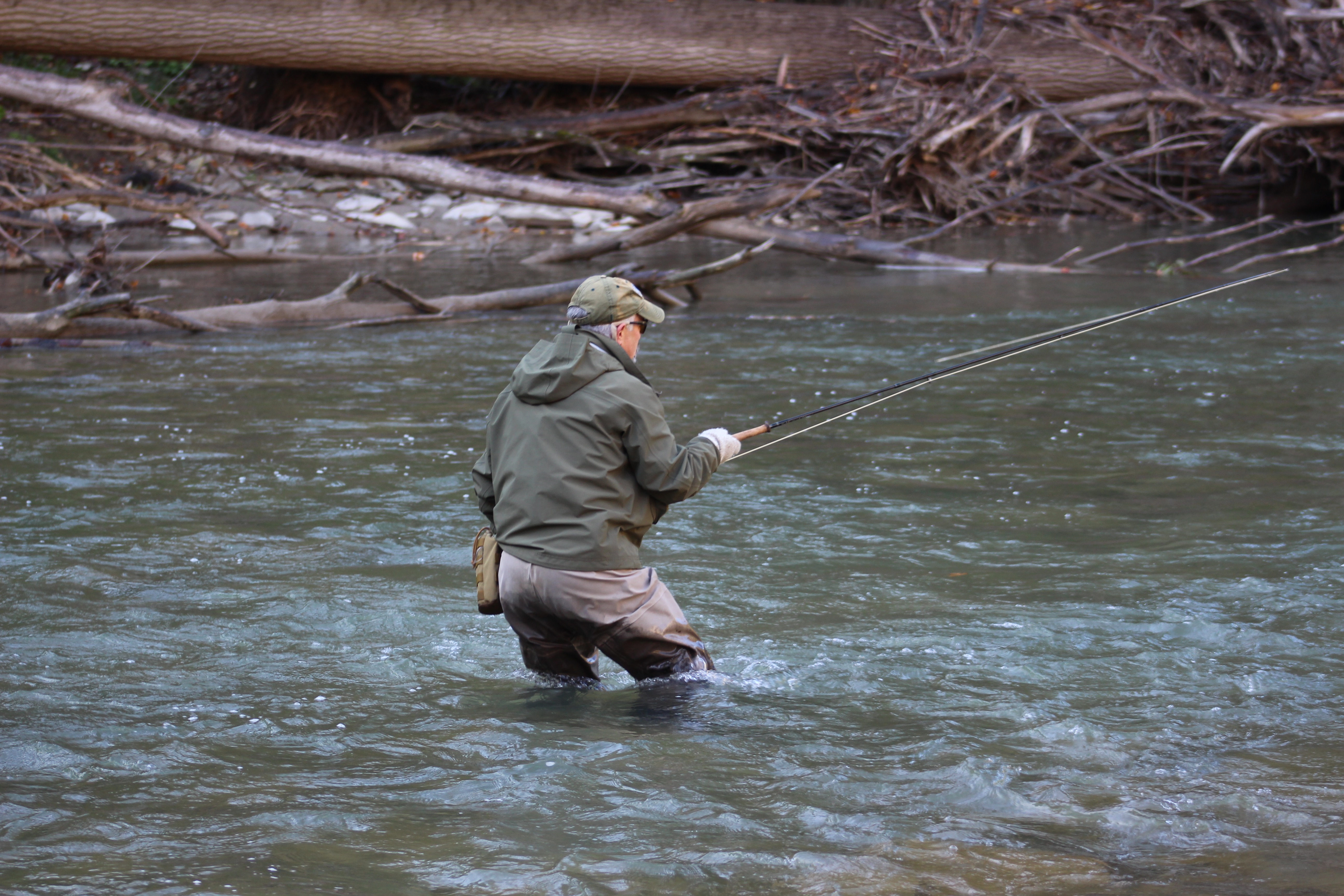 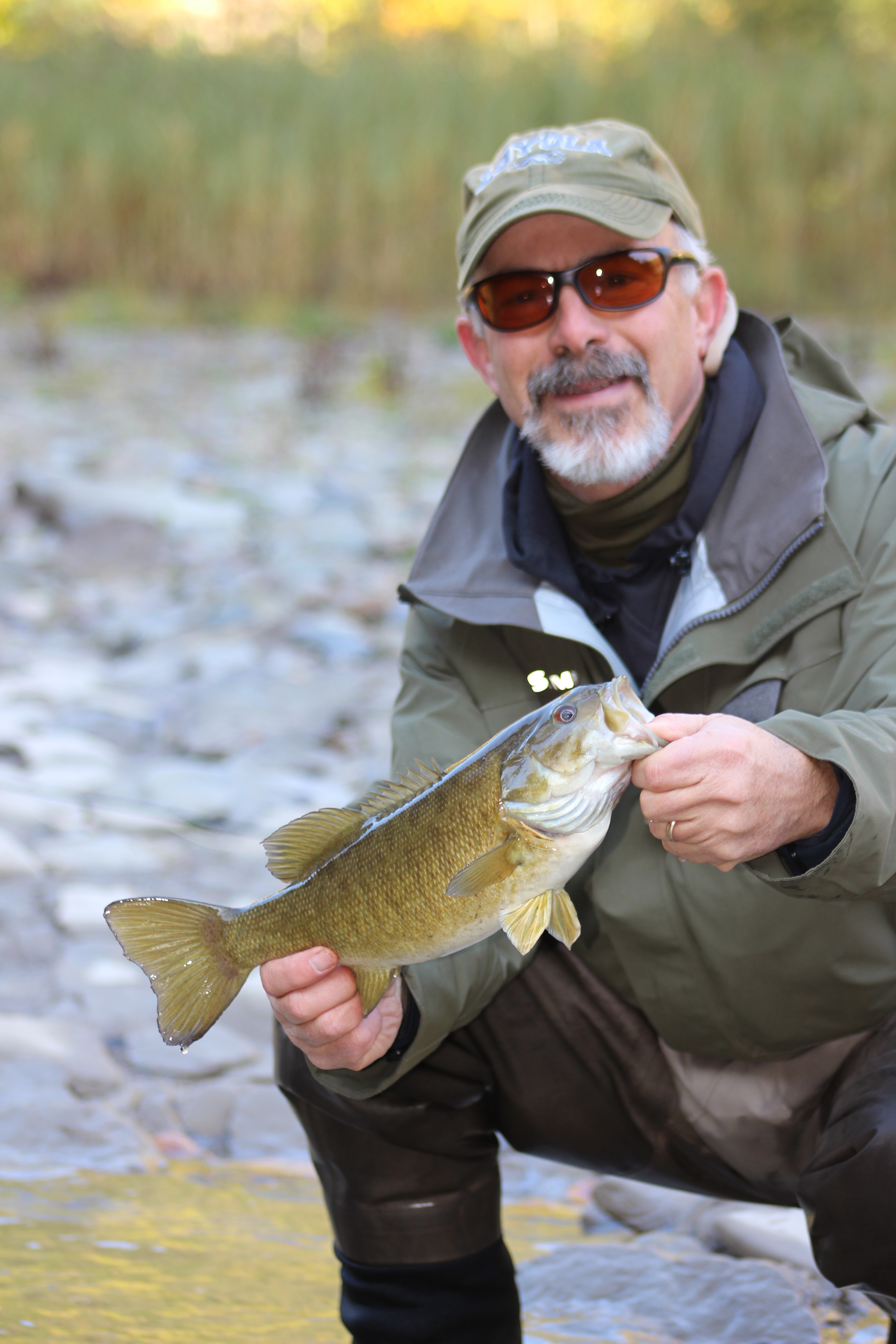 Reply golden goose sneakers
5:55 AM on January 24, 2022
Thank you so much for providing individuals with remarkably special chance to discover important secrets from this web site. It's usually so terrific and stuffed with amusement for me personally and my office friends to search your web site a minimum of 3 times per week to find out the new secrets you have got. And of course, I'm always happy for the mind-boggling ideas you give. Some 2 tips in this post are honestly the best we have all ever had.
golden goose sneakers

Reply kyrie 4
8:51 AM on January 24, 2022
I as well as my friends came reading through the great secrets and techniques found on the website and so quickly I had an awful feeling I never thanked the website owner for those tips. Those boys became so joyful to read through them and have now truly been taking pleasure in those things. Thank you for simply being simply helpful as well as for obtaining these kinds of outstanding useful guides most people are really desperate to be aware of. Our honest regret for not saying thanks to you sooner.
kyrie 4 http://www.kyrie4shoes.us

Reply kd 12
10:37 AM on January 25, 2022
Thank you for your entire hard work on this blog. Kate delights in making time for internet research and it's obvious why. Most of us notice all of the powerful ways you produce good things on this website and in addition increase contribution from some other people on that issue and my princess is truly discovering a whole lot. Take pleasure in the rest of the year. You're doing a really good job.
kd 12

Reply golden goose sneakers
11:30 AM on January 26, 2022
I simply wanted to thank you very much again. I'm not certain the things that I could possibly have followed in the absence of those creative ideas provided by you regarding this situation. It was actually a challenging matter for me, but being able to see this expert style you handled the issue forced me to jump over fulfillment. I will be happier for the service and even trust you find out what a great job your are carrying out instructing the others all through a blog. I know that you've never come across any of us.
golden goose sneakers

Reply air jordan
4:23 PM on January 28, 2022
I must express thanks to this writer for rescuing me from such a setting. Just after surfing through the search engines and finding recommendations which were not pleasant, I was thinking my life was over. Living minus the solutions to the difficulties you've sorted out through this website is a critical case, as well as those which could have in a wrong way damaged my entire career if I had not noticed the blog. Your primary skills and kindness in playing with every aspect was precious. I'm not sure what I would have done if I had not encountered such a solution like this. I can also at this point relish my future. Thanks for your time so much for the expert and result oriented help. I won't be reluctant to suggest the sites to any person who should get tips on this situation.
air jordan

Reply jordan shoes
7:04 PM on January 28, 2022
I simply wanted to make a small word to be able to express gratitude to you for all of the precious strategies you are sharing at this site. My rather long internet lookup has at the end of the day been recognized with useful knowledge to share with my friends. I 'd assume that many of us visitors are quite lucky to exist in a perfect community with many marvellous professionals with very beneficial basics. I feel very happy to have discovered the website page and look forward to tons of more amazing moments reading here. Thanks a lot again for all the details.
jordan shoes http://www.jordanshoes.us

Reply golden goose
8:40 PM on January 28, 2022
I am also writing to make you be aware of what a beneficial experience my friend's daughter encountered going through yuor web blog. She picked up several issues, which included how it is like to have a marvelous giving mindset to get certain people effortlessly know some multifaceted things. You actually surpassed people's expected results. I appreciate you for displaying these necessary, dependable, explanatory and even fun tips on that topic to Gloria.
golden goose

Reply yeezy boost 700
6:24 PM on January 30, 2022
I wanted to type a small word to say thanks to you for these amazing techniques you are showing at this website. My time intensive internet investigation has now been compensated with beneficial points to talk about with my neighbours. I would assume that most of us website visitors are undoubtedly lucky to live in a magnificent community with so many brilliant people with beneficial methods. I feel quite blessed to have discovered the web pages and look forward to really more thrilling times reading here. Thanks a lot once again for a lot of things.
yeezy boost 700

Reply lebron 18
9:05 PM on January 30, 2022
Thanks so much for providing individuals with an extraordinarily remarkable chance to read critical reviews from this blog. It is often very good plus packed with a great time for me personally and my office mates to search your website at a minimum thrice in 7 days to find out the newest things you will have. And of course, I am just usually satisfied considering the exceptional concepts you serve. Some 2 points in this post are in truth the simplest we have ever had.
lebron 18 http://www.lebron18shoes.us

Reply jordan shoes
1:33 PM on February 1, 2022
I'm commenting to make you be aware of what a incredible encounter our child encountered visiting your web site. She learned plenty of details, which included what it's like to have a wonderful coaching nature to get certain people effortlessly learn about some multifaceted issues. You undoubtedly surpassed our expected results. I appreciate you for coming up with these warm and friendly, trustworthy, edifying and in addition easy guidance on this topic to Evelyn.
jordan shoes

Reply lebron james shoes
10:09 AM on February 2, 2022
Thank you so much for providing individuals with remarkably wonderful chance to read critical reviews from this site. It really is so cool and jam-packed with a good time for me personally and my office fellow workers to search your website at least three times in 7 days to learn the newest things you have got. And definitely, I am also actually satisfied concerning the outstanding techniques you give. Some 2 tips on this page are completely the most effective I've had.
lebron james shoes

Reply kd12
9:58 AM on February 4, 2022
Needed to create you one little observation to thank you as before with the great solutions you have contributed here. It has been certainly shockingly generous of you to provide freely what exactly most of us could possibly have offered for sale for an e-book to get some cash for themselves, notably seeing that you might have tried it in case you wanted. The suggestions additionally worked to be a great way to recognize that many people have the same zeal similar to my own to understand many more with regard to this issue. I am sure there are lots of more pleasant situations in the future for individuals that scan your blog post.
kd12

Reply moncler
8:06 AM on February 5, 2022
I enjoy you because of your entire efforts on this web site. My mum delights in doing internet research and it's really easy to understand why. Almost all learn all concerning the dynamic method you provide great items on your website and as well improve participation from other ones on the issue and our favorite child has been understanding a great deal. Enjoy the remaining portion of the year. You're the one performing a fabulous job.
moncler

Reply kobe 9
10:59 AM on February 5, 2022
I definitely wanted to develop a quick note in order to thank you for those precious tricks you are posting at this website. My extensive internet look up has at the end of the day been honored with wonderful facts to go over with my family. I 'd say that many of us readers actually are rather fortunate to be in a remarkable network with very many perfect people with useful opinions. I feel very privileged to have discovered the web pages and look forward to so many more awesome minutes reading here. Thank you once more for everything.
kobe 9 http://www.kobebasketballshoes.net
« Prev12345...46Next »